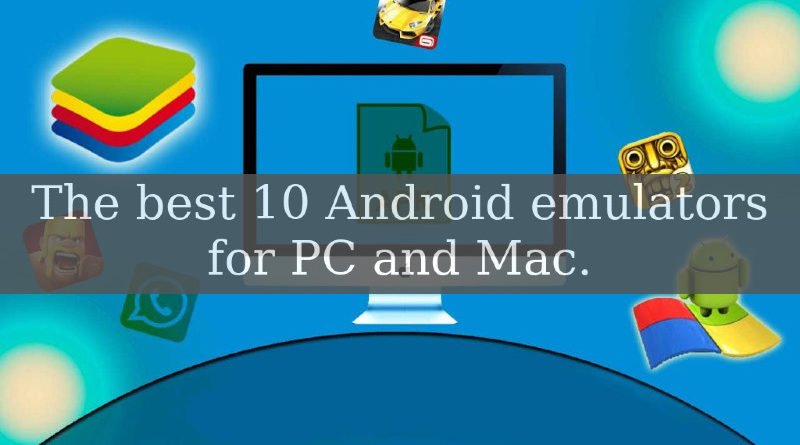 There are so many valid reasons why someone might think of running Android applications on their PC or MAC. As a rule, all app developers should test their application before deploying it. Therefore, an emulator would be very convenient for them, they would have the opportunity to test the functioning of their app, on various devices. Or, maybe you want to install it just to keep it ready in case you need to run an app on your PC or MAC. In any case, emulating Android on your computer is possible and is also much simpler than you can imagine. Listed below are the best Android emulators for PC and Mac.

It is also worth mentioning that Windows could natively allow Android apps to run directly in Windows 10 starting in 2021. This could open a very important road towards app emulation technology, which is still little considered today.

If you are a video game enthusiast, LDPlayer is the emulator for you. This emulator has been heavily focused on performance, for example, when emulating Android Nougat 7.1, the usual range of player-oriented features are presented, including controls for keyboard mapping, multi-instance collaborative play, high FPS and a very respectable graphic support. This is one of the few emulators that supports a wide variety of games, including Garena Free Fire, Among Us, Clash of Clans, and many more. In the latest releases, LDPlayer has optimized the performance of League of Legends: Wild Rift by providing pre-set key mapping for these games, as well as many other custom features. In addition to this, LDPlayer is also the perfect emulator for using TikTok, Instagram, WhatsApp, etc.

Android Studio is the default development console for Android. It comes with a number of tools useful for developers to create specific apps and games for the Android OS. It has an internal emulator that you can use to test your app or game. The setup is quite complicated and can take a long time. Therefore, it is not recommended to use for a beginner. However, developers use this tool as an emulator to test their apps. It also supports Kotlin, an open-source, multi-paradigm (basically object oriented) language developed by JetBrains, a company known for the quality of its general development IDEs.

Read more: How to make an android app without coding

ARChon is not a traditional type emulator. You can only find it as an extension of Google Chrome, so it is not an application to physically download and install on your computer. Being a browser extension, it consequently provides the ability to run Android apps and games, only within the Chrome browser (albeit with limited support). In any case it is not an easy to use emulator. Far more configuration steps are required to make it work than most other Android emulators we’ve seen so far. On the plus side, however, is that it works with any operating system capable of running an instance of Chrome (Mac OS, Linux, Windows, etc.). So it is not related to the guest operating system, but only to the presence of Chrome as a web browser, installed on the computer. By connecting to GitHub you can find detailed instructions for its use.

Bliss works slightly differently from traditional emulators. It works like an Android emulator for PC but needs a virtual machine. However, it can also work directly from a USB stick. The USB boot option is definitely an option for experienced users and is not recommended for intensive use of the emulator. VM installation is simple, but very boring, if you have never created your own virtual machine before. The USB installation method turns out to be even more complicated, but it allows the computer to actually run Android natively. This makes it unique. Of course, it only works very well if your OS is compatible, so be prepared to make a backup of your current OS first. The system running Android Oreo turns out to be the latest version of Android running on an emulator.

Bluestacks is the beginner-friendly Android emulator, and is compatible with Windows and Mac. It was one of the first emulators to work smoothly and regularly right away and still receives regular updates. The emulator is aimed at the world of video games. It may seem a bit cumbersome at times, but Bluestacks has solved the problem brilliantly, with an upgrade to version 4 (released in 2018). It also includes key mapping and settings for many installed games. This should help make things a lot easier. Bluestacks also created MSI App Player, another excellent emulator that some believe works even better than Bluestacks. You can try either one, according to your needs, but both belong to Bluestacks.

GameLoop, formerly known as Tencent Gaming Buddy, is an Android emulator suitable for the world of video games. In fact, it’s just as reliable as Tencent calling it the official emulator for its games including Call of Duty: Mobile and PUBG Mobile. Of course, it also includes other games besides Tencent. The emulator, downloaded and installed correctly, worked perfectly. It should be noted that this emulator is not suitable for testing apps and therefore not useful for development. However, it represents a very performing video game emulator. In addition, the controls and keyboard performance are great.

This Android emulator is mainly suitable for developers. It allows you to test your apps on a wide variety of virtual devices. You can configure the emulator with various Android versions depending on your needs. For example, you can run a Nexus One with Android 4.2 or a Nexus 6 with Android 6.0. You can easily switch between virtual devices at your convenience. It does not lend itself very well to non-professional use, but offers its services for free. Its most interesting feature is that you find it available in both desktop and cloud versions. Leaving the Genmony servers the hardest work to do.

MEmu is another of the emerging Android emulators that seems to cater to the video game world. One of its main features is support for AMD and Intel chipsets. Even though it is used mostly on AMD processors, it’s nice to see developers pay special attention to the AMD platform anyway. Also, it supports Android Jelly Bean, Kit Kat and Lollipop. You can even run multiple instances at the same time for multiple games or test features. It is aimed at video game players, just like Bluestacks, but can also be used as a development tool. The premium version is released for $ 2.99 per month without ads, plus it has additional customization options. The emulator receives updates regularly. You can check the latest versions by clicking here.

NetEase has created a truly professional and reliable emulator. It is another game emulator with the same functionality as the other emulators seen so far. The emulator runs Android 6.0, perhaps this is the only flaw for an emulator with these features. That said, it has decent boot time and enough features to deserve a lot of consideration. We had no problems using it, but it worked well and we were able to download all the games we wanted to test. MeMU, Bluestacks, and GameLoop have surpassed it in terms of features, and all three receive regular updates. However, if none of these work, NetEase is likely a great replacement.

Nox is another Android emulator for PC aimed at the world of video games. Includes key mapping, the ability to control key map gestures. For example, you can assign the function to swipe right on an arrow key and use it in a game without actual hardware controller support. It’s a lot of fun and seems to work pretty well. It is completely free and under active development. I recommend that you take a look at the demonstration video below, to fully appreciate the features of this splendid emulator.